‌
How to increase your running mileage without getting injured

Increasing the number of miles that you run per week is arguably the most reliable way of improving your performance as a runner.

But it’s also one of the most common causes of injury in runners. As you increase the amount of strain you put on your body, if you don’t give it time to adapt, it’s likely that some part will become irritated or fail, leading to injury.

We learned this the hard way, getting injured one week into training for our first marathon, leading to a four-month recovery. The good news is, it’s easy to avoid these issues by following some simple steps and rules of thumb, outlined below.

TL;DR: how do I increase my running mileage safely without getting injured?

The key to increasing your mileage safely is to offset the additional stress on your body by minimising the impact associated with running in all other areas such as shoe condition, speed, terrain, and recovery.

How much can you increase your mileage per week without getting injured?

First things first – what’s a sensible level of increased mileage in a given week? The tried and tested rule of thumb is that you should not increase your weekly mileage or your longest run by more than ten percent week on week. This means that your body is never too far out of its comfort zone compared to what it’s done previously, as long as you’re careful to give it an easy ride in other aspects of running, such as the speed at which you run, the condition of your shoes or terrain that you’re training on (more on these below). This is why more advanced marathon training plans recommend a period of base training before the plan: so that the runner’s body can get used to an increased mileage before they start incorporating the harder sessions associated with a plan.

(Aside: want a good marathon training plan? We and many others in our club, swear by Pfitzinger & Douglas’s legendary Advanced Marathoning (or P&D as it’s known by club runners across the world)).

As running shoes reach the end of their life, they gradually deteriorate, losing shock absorption and grip. This leads to increased stress on the body as it benefits from less cushioning. Related: see our post on how to tell when your running shoes need replacing.

Therefore, if you’re making a concerted effort to run further or more miles per week than you have before, it’s not the time to be running on old shoes. Back when I got injured training for my first half marathon, I was running on 800-mile old shoes at the same time as rapidly increasing mileage. I was lucky to only have to take four months off to recover!

Even if your shoes have some miles left in them, but are nearing their end of life, it may be worth buying your next pair early and dovetailing them into your training. That way you’re benefiting from some of that new shoe bounce while seeing out your old pair like the responsible steward of your money and the environment that you are. In fact, this is considered by experts backed by actual science to be good practice regardless of whether you’re increasing your mileage or not.

Another way to take some of the strain off your body to allow it to adapt safely to running longer distances is to be thoughtful about the type of terrain you’re training on.

Where possible, avoid hard surfaces like roads and pavements in favour of softer ones like trails, grass, or even running tracks. Of course, for many of us it would be challenging to shift entirely to this kind of terrain, but even shifting 20% of your running will help offset the fatigue of some of that extra distance. If you’re organised, you could proactively build in routes with off-road sections, or extra sessions at the track, into your plan as you build up your mileage.

One of the biggest contributing factors to running injuries is speed. The stress on the body increases exponentially as you go faster, as well as the risk of a fall or twisted ankle. So it’s very important to bear this in mind as you’re increasing your mileage: this isn’t the time to simultaneously train for that mile PB. Build up the miles first, or work on your speed: don’t attempt to do both at the same time.

Many runners find the recovery run a necessary evil, and none more so than those increasing their mileage. Do not be tempted to cut out these shorter runs, which help the body repair itself, to help increase your overall distance. That way be dragons.

Yawn. You may be bored of being told that sleep is an important part of the training plan, giving the body time to recover from its exertions, but (*puts teacher’s hat on*) this is particularly true as you’re increasing your mileage. If you’re following the steps above, your body is adapting steadily to the longer distances, but it does need a chance to do its thing whilst you have sweet dreams of future glory as a distance running machine. Let it.

Increasing your mileage is one of the most reliable ways of improving your times across pretty much all distances, and doing it safely is very straightforward with a little bit of discipline. So, go forth, be patient, follow the steps above, and you’ll be knocking out the PBs before you know it. Let us know when you do, or if you have any other tips for other runners looking to increase their mileage. 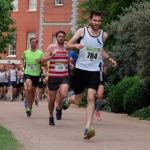 Tom is the founder of geerly. Based in West London, he found his passion for running in his mid-30s. Since then, he's discovered some relative talent for distance running, achieving sub 2.50 in his first marathon in Manchester, UK, in 2019. At geerly he's focused on using technology to help runners smash their goals by helping them choose the right gear and find the very best prices.

All things running gear - including shoes, watches, jackets, and bags.

How to avoid injury, recover quickly, and return to running.

Running books, podcasts, routes, and ideas to give you that extra spring in your step.

How to eat healthily to maximise training benefit and improve your overall fitness.

How to prepare, how to execute, and how to bring it home.

How to approach your running training to go harder, faster, for longer.